Commanding and powerful, their stories have set the ideal standard for dominance. Consisting of Nate Milstein, Vince Gillman, Matt Devonshire, and Matt Bryson, Titans in Time have begun to help people overcome their issues through their music and values, using the mantra “we’re all titans”. Knowing that everyone comes from a different background, the group strives to let their fans know that their issues can be worked through, and the ‘Titans’ community is there for them. Titans in Time is spreading this idea along the east coast with tours and shows alongside some of todays biggest rock bands. After being named one of the top ten bands of 2015 by The Rust Belt Chronicles, the quartet spent 2016 promoting their music and releasing music videos that earned the awards of “EP of the Year”, and “Single of the Year” by Banks Radio.

Titans in Time has released two EP’s and is releasing a third in March 2017. “Oceanus”, the first CD gets its namesake from the Greek titan of the same name. With an aggressive tone, the EP delivers driving guitar and roaring drums with vocal lines that can be hummed instantly. “Vulcan”, the second EP was recorded and produced by Jim Wirt (Incubus, Hoobastank, Alien Ant Farm, A Skylit Drive). The EP takes on a much more dynamic tone than the first, and is full of catchy hooks and a much more mature writing style. There have been three music videos released with songs from “Vulcan”. The EP was named “EP of the Year” by Banks Radio, was on the “Top 20 Albums You Need to Hear Right Now” list by Adam Marx, and has had singles in the top 10 songs on “Banks Radio” online radio.

The live performance of the band is truly something that rivals today’s major acts. They conduct themselves in a way that pulls the focus to Titans in Time on the whole rather than one specific band member. At one minute, one is following Gillman bounce around the stage and the next they become captivated with Milstein, Devonshire, and Bryson’s intensity. “… our end goal is for our worst live show to be most people’s best live show,” Milstein has been caught saying. Titans in Time looks at the stage as a place to lay everything out for the world to see, and to build a community with their fans.

The band is steadily picking up endorsements as they continually tour. The band is currently endorsed by S.I.T. Strings, Soultone Cymbals, Sinister Guitar Picks, Big Bends, and Coldcock Whiskey.

Listen To Music by Titans in Time

Lie To Me Rock 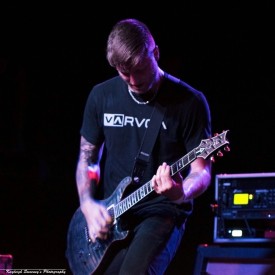